This week the branch source part of the plugin has taken some shape, a few more important bugs were fixed and features were added. GitLab Branch Source Plugin was also hosted on jenkinsci GitHub organisation.

1) Request to host our plugin on Jenkins official GitHub organisation:

To initiate the process to move our plugin into jenkinsci org, I raised a ticket. There is a conflict due existence of another plugin with the same name but we are expecting it to be fixed as the old plugin is not maintained and also not released to Jenkins update centre.

On Friday, our plugin got hosted in the jenkinsci organisation. I am hoping to fix a couple of issues and making my first release on Monday.

The official GitLab-Branch-Source-Plugin repository can be found here.

There were couple of bug fixes in this pr:

i. GitLabSCMNavigator now takes serverName instead of serverUrl.

iii. In GitLabSCMNavigator the retrieve(c, o, e, l) method was called for branch indexing directly. Since the gitlabProject was fetched in retrieveActions(e, l), it was giving null pointer exception. So refetched the GitLab project:

iv. There is another issue that I am trying to fix here is that default SCM Traits are not getting populated for GitLab Group Job type. See pr for more info.

Added Impl of GitLabBuildStatusNotifier class that contains a method sendNotifications which communicates with the GitLab Server to publish the commit status (either SUCCESS, FAILED, PENDING etc.). There are 3 other extensions:

Another issue fixed was the enqueue error. I made a mistake of changing the status of an already pending pipeline to a pending again when build started. Changed it to running.

We moved form projectName to projectPath variable. Instead of only project name now the projectPath contains project path with namespace.

Another issue fixed, was when the sourceproject for a mr is missing. The trait will compare different mrs to either exclude branch or not, there is a chance that the desired mr actually has the source project id but an mr without source project id is encountered will result in an NPE. So when adding mrs to the request, I am removing the mrs with null source project id in GitLabSCMSource retrieve(c, o, e, l).

Tags support was added by Impl of GitLabTagSCMHead and TagDiscoveryTrait. And required indexing in GitLabSCMSource.

Fixed a NPE which was caused due to a missing implementation of GitLabSCMSFileSystem was added in a06cfe5.

This pr also fixed issue which caused closed mr branches not to be built.

This issue was not totally fixed, see JENKINS-58477.

6) Release permission for our plugin:

Sent pr to repository-permissions-updater to get required permission to release our plugin to Jenkins update center.

There are 2 cases to consider when reporting build status to GitLab.

This can be seen in the following screenshot.

This is how it is implemented in ArgelBargel’s GitLab Branch Source Plugin.

The Stage 1 failed but GitLab Pipeline is not notified about it.

This is what I have implemented. We are notifiy GitLab pipeline about the Job status instead of Pipeline stages. 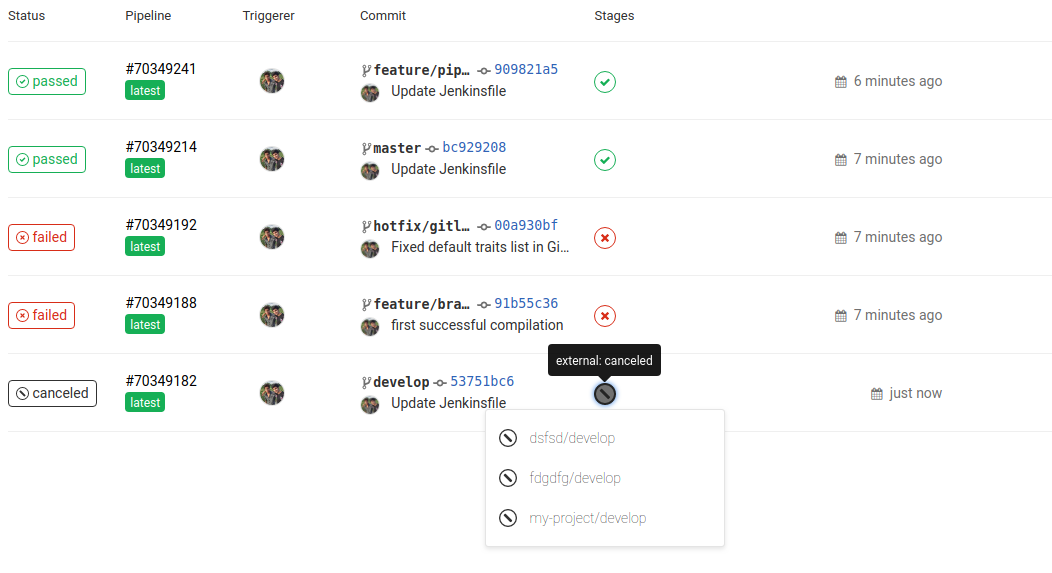 This is done with following assumptions:

If the above assumptions are wrong then it can be problems. Let me know your thoughts.

Sometimes user might require to not get notified about the Pipeline status. So a specific plugin called skip-notification-trait-plugin exist that provides the skip notification behaviour to Multi Branch Pipeline Job types.

This issue is similar to the enqueue error solved in JENKINS-58400.

This weekend I will be implementing the webhooks support which will enable server to send push events to our Jenkins instance for auto indexing and building.